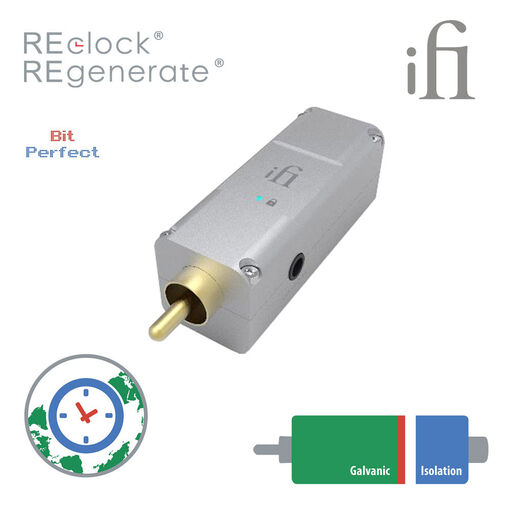 With the very latest AMR/iFI technology, new SPDIF iPURIFIER is suited to the gamut of SPDIF sources that are on the market today. It takes any barely recognisable ‘square wave’ and with REclock˚/REgenerate˚ the signal is back to a real-world, perfect wave form.

From Apple TV to Google Chromecast to PS4/Xbox to 4K Smart TVs, SPDIF is the main digital audio output. As with all mainstream products, the critical SPDIF signal transmitted is of fairly low quality. The SPDIF iPurifier runs the SPDIF signal through 4 comprehensive stages, and the result is a fully-restored, perfect SPDIF with jitter eliminated. The result is sound quality that has greater warmth, resolution and dynamic contrast.

Restoring the Waveform and eliminates all jitter

[signal-22] The signal from SPDIF devices is a digital signal. The industry standard for looking at the quality of a digital signal is to look at the ‘square wave’ (on an oscilloscope).

But the wave is anything but ‘square’, resembling more of a jagged wave. By running through the four major stages of the SPDIF iPurifier:

The Waveform is back to ideal.

Bit-Perfect audio on all fronts

AMR/iFi prides itself in assuring Bit-Perfect signal transfer. This means the signal remains original and unchanged. The SPDIF iPurifier ensures a Bit-Perfect transfer which is highly unusual for SPDIF devices. It can handle 44.1 / 48 / 88.2 / 96 / 176.4 / 192kHz; 16 to 24 Bit, DSD/DoP, and even Dolby Digital and DTS.

The SPDIF iPurifier has no peer. One of the key aspects is that it has galvanic isolation which uncommon. It was however found in the original Digital Lense which retailed at US$1,800 in 1996.

Galvanic isolation is converting a signal from one form to another which will discard spurious noise. This is a major factor behind the SPDIF iPurifier’s ability to stop noise contaminating the signal.

AMR’s Global Master Timing (GMT)/ Memory Buffer System represents a total ‘out of the box’ systematic digital solution that solves the digital SPDIF jitter issue once and for all. The Intelligent Memory System holds a large number of complete audio samples, so it may completely absorb a large amount of variation (jitter and drift) in the incoming signal, while still sending out data at a fixed and precise clock rate, regardless of variations in the incoming clock.

Central to the GMT clock system is an ultra-low jitter, quartz-driven clock system (<300 femto second crystal) capable of producing millions of different frequencies with a precision of better than 0.001Hz. Hence, if the frequency shifts from 192,000.002Hz to 192,000.003Hz over a period of minutes (drift) which is the minimum to be meaningful, the GMT clock will intelligently and precisely track the change. This is a core technology of the SPDIF iPurifier.

Packed to the brim

With a Bill of Materials (BOM) that stands at 53 individual components, be assured that beneath its unassuming exterior, there are two separate PCBs, each mil-spec’d and packed to the brim with advanced technology.

Is there an irritating hum coming from your system?

If so, try touching it. If the noise increases, it’s missing a earth/ground and you need help.

The iGalvanic3.0 is a ground-up design with full-galvanic isolation on USB3.0 and USB2.0