Gregory Porter : Take Me To The Alley 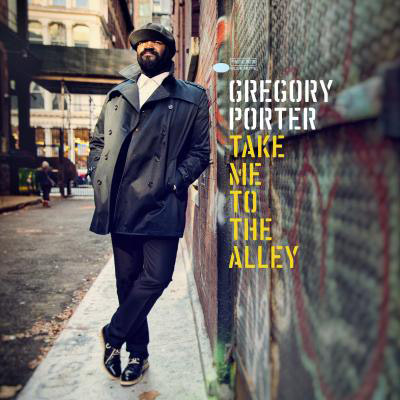 An artist whose music is at once timeless yet utterly of its time, Gregory Porter solidifies his standing as his generation’s most soulful jazz singer-songwriter with Take Me to the Alley, the much-anticipated follow-up to his sensational 2013 Blue Note debut Liquid Spirit. Yet in his remarkable career, Porter has time and again demonstrated an innate ability to transcend genre and connect with audiences from all walks of life, and his new music reflects the singer’s continued and mindful growth as an artist and as a person amidst the constant touring demands that have resulted from tremendous international success. Recently Porter moved his family from Brooklyn back to his hometown of Bakersfield, California, where he can be closer to his brothers and sisters. “The intensity of the road has caused a desire for me to be grounded,” Porter explains.

Liquid Spirit – which followed the critically-acclaimed and GRAMMY-nominated albums Water (2010) and Be Good (2012) – quickly grew into a global phenomenon, selling a million albums worldwide and becoming the most streamed jazz album of all-time with over 20 million streams. The album has sold Platinum in the U.K. and Germany, and Gold in France, The Netherlands, and Austria. In the U.S. Porter made his first-ever national TV appearances on The Tonight Show and Jimmy Kimmel Live while both ESQUIRE and NPR Music declared him “America’s Next Great Jazz Singer.” Liquid Spirit also won Porter his first GRAMMY Award in 2014 for Best Jazz Vocal Album while also earning him a Best Traditional R&B Performance nomination for his affecting ballad “Hey Laura.”

In the Fall of 2015 Porter finally found the time to return to the studio in New York City to record Take Me To The Alley. As he’s done on his previous three albums, Porter teamed with producer Kamau Kenyatta to craft a collection of stirring originals that juxtapose the personal and political. His partnership with Kenyatta started in the mid-1990s when he was a student at San Diego State University (Porter began his college years playing football on a full athletic scholarship before a shoulder injury diverted him into a music career). It was through Kenyatta’s mentorship that Porter’s professional musical career began. “Kamau has been most instrumental in taking what I have and refining it,” Porter observes. “He’s been great at offering encouragement to what I already have artistically.”

Take Me to the Alley opens with the anthemic “Holding On,” a song Porter co-wrote and recorded with the U.K. electronica act Disclosure that was the lead single of their 2015 album Caracal. That version boasted a decidedly EDM vibe that extended Porter’s ongoing affiliation with DJ culture (see also the thumping “Liquid Spirit (Claptone Remix)” which reached #1 on the Ibiza Shazam charts this past summer). The new makeover replaces the skittering beats and booming bass with a more spacious arrangement, marked by Crawford’s plaintive piano accompaniment, James’ elusive bass lines, and Harrold’s succinct muted-trumpet solo.

Brimming with lyrics about the “irrepressible force of love,” the decidedly dressed-down version unveils the command of Porter’s songwriting gifts. “I decided to do the song the way that I would have recorded it on my record,” Porter says. “It’s a way of saying that a song is a song is a song. The lyrics and the intention of the song come through no matter what kind of bells and whistles are going on.”

The album continues with the bluesy “Don’t Lose Your Steam,” one of two songs that Porter wrote with his three-year-old son Demyan in mind. Propelled by a stomping, organ-enhanced groove, Porter belts out encouraging lyrics about staying committed to one’s goals regardless of hardship.  The other tune Porter wrote for Demyan is “Day Dream,” which features a lithe, piano-driven beat and a breezy tenor saxophone solo as accompaniment to fanciful lyrics in which Porter observes Demyan’s vivid imagination as he plays.

Inspiration from other family members comes with “More Than a Woman” and “In Heaven.” The incredible love, guidance and encouragement of his late mother, Ruth Porter informs much of the sanguine ballad “More Than a Woman,” while the latter (written by Porter’s cousin, Darlene Andrews) is an optimistic, family song the Porters often sing when bidding farewell to a departed family member.

Socio-political commentary remains an integral role in Porter’s artistry as on earlier songs such as “1960 What?” and “Musical Genocide.” Take Me to the Alley contains several, including the stunning title-track, which showcases Olatuja’s caressing background vocals. Motivated in part by his mother, who often gave food and shelter to the less fortunate, and written in New York during Pope Francis’ visit to the Big Apple, “Take Me to the Alley” soothes the soul as Porter sings of redirecting the collective energy we often give to royalty to the downtrodden. On the strident, hard-bop excursion “Fan the Flames” Porter calls for vigorous, nonviolent protest amidst a flurry of injustices.

While admittedly cheeky, the flirtatious “French African Queen” slyly addresses socio-political issues within the Pan-African Diaspora. Underneath a vivacious, Nigerian-laden jazz groove, Porter serenades a beautiful French African lady: “What I’m saying to her is we come from the same tree,” Porter explains. “My dream is to bring her gifts and my music. And I don’t want her to deny me of that dream.”

Romantic affairs of the heart are another constant in Porter’s songs, and Take Me to the Alley has several new standout songs in that vein including the simmering “Consequence of Love,” a mid-tempo ballad that deals with the power and irrationality of love. “Love is ruled by itself. But sometimes we get in the way of love through governmental policies, race-relations, distance, and adolescent thinking. Anytime two people love each other, let it be,” Porter says.

The sardonic “In Fashion” picks up some the thematic tones from Porter’s 2010 song, “Bling Bling.” Basically a whimsical kiss-off song, powered by piano and drums, Porter sings of the dangers of being both self-absorbed and being obsessed with such a person. Porter gives both sage words of advice about being a roaming lover and confessions to his own romantic shortcomings on the smoldering ballad “Don’t Be a Fool,” which once again showcases Olatuja’s sparkling vocals and Pivec’s simpatico organ accompaniment.

On the somber ballad, “Insanity,” Porter pleads to a lover to remain committed to the relationship amid romantic dissonance. “Sometimes, the person that you need to lean on during periods of sorrow is the person that you’re the angriest at,” Porter keenly observes.

As Porter polishes his artistry as one of our most heartfelt singer-songwriters on Take Me to the Alley, his burgeoning body of work will continue to give voice to its modern times while simultaneously echoing the legacy of jazz and soul’s yesteryear and informing generations of musicians to come.

Leonard Cohen: Thanks For The Dance – LP