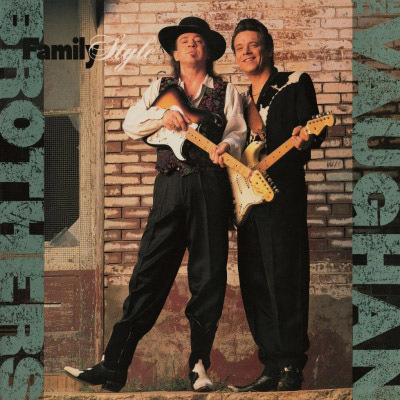 Family Style is a fantastic Blues Rock album by the Vaughan Brothers, released in 1990. The album features the brethren guitarists and vocalists, Jimmie and Stevie Ray Vaughan, in their only studio collaboration.

In his early years, Stevie Ray Vaughan often remarked that he would like to do an album with his brother. He fulfilled that wish in his very last studio performance, which was released nearly a month after his death. The liner notes end with "Thanks Mama V. for letting us play."

With slick production from Nile Rodgers and employing neither guitarist's band (Double Trouble nor the Fabulous Thunderbirds), this is bluesy, but far from purist. Jimmie makes his vocal debut on "White Boots" and "Good Texan," and the brothers blur the lines between their expected guitar styles - Stevie sometimes going for a less sustainy twang, Jimmie moving into Albert King territory.