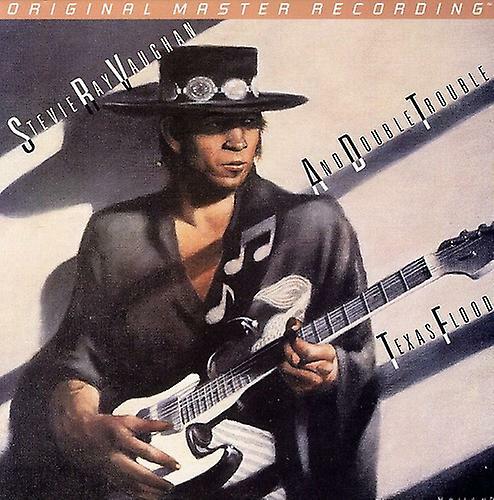 A debut seemingly sent from the musical heavens, Stevie Ray Vaughan and Double Trouble's Texas Flood announces the arrival of a truly special talent â€“ namely, the last major blues guitarist to emerge with a voice all his own, an immediately distinctive style, and a soulfulness that you feel inside the depths of your existence. Not for nothing was Vaughan frequently mentioned in the same breath as his closest musical cousin, Jimi Hendrix.

This staggering 1983 album has been remastered and reconfigured multiple times, yielding sporadic results. We think we finally got it right: Mastered from the original master tapes, this hands-down definitive digital version brings Vaughan and Co. into your listening room and places them at your feet. Vaughan's trademark Fender Stratocaster has never sounded more real, electric, or authentic on record.

Born of hot, sweaty bars and years of woodshedding in front of demanding crowds, Texas Flood is rooted in Austin's rich musical heritage as well as Vaughan's tenure in Paul Ray & the Cobras, recipient of the "Best Band" award in the city's first-ever (and now famous) music poll. After getting his feet underneath him, Vaughan formed Triple Threat, the ensemble that morphed into Double Trouble – the very group he'd perform with for the remainder of his career. Having dropped from a quintet to a trio, extra demands were placed on Vaughan's role and playing – requirements he was more than comfortable to accommodate.

The proof is scattered throughout Texas Flood, which single-handedly resuscitated a genre that had long been dormant. Having spent more than half a year on the Billboard charts, the set pays homage to influences (Hendrix, Albert King, Larry Davis) and ripples with a freshness that joins contemporary Texas blues and muscular rock at the hip. Vaughan's playing is all about emotion and pace, whether he's lighting it up on the jumpy "Love Struck Baby" or bursting with enthusiasm on the sparks-shooting "Pride and Joy."

The trio is equally effective on slow numbers, with covers of Howlin' Wolf's "Tell Me" and Davis' "Texas Flood" weeping with longing. And as if to insure his name is etched in history, Vaughan takes a jazzy stroll with the instrumental tribute "Lenny," covering all the bases in less than 40 minutes of time. Put this up with anything from Clapton, Butterfield, Mayall, Winter, and the like – Texas Flood is legion.

Our numbered edition hybrid SACD brings the images Vaughan's scrunched-up face, closed-eyes appearance, quick-draw fingers, and cowboy hat into pristine focus. More importantly, the searing tones from his guitar and every touch of his pick on the strings are captured with extreme delicacy, so you don't miss a note. The soundstage is deep and wide, and the microdynamics simply pop. This is the closest you will ever come to hearing Vaughan perform in Antone's, circa 1982.

David Crosby - If I Could Only Remember My Name SACD