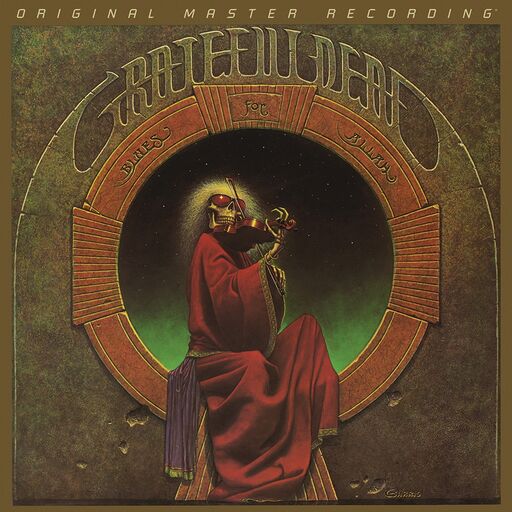 "If you get confused, listen to the music play," counsels Grateful Dead leader Jerry Garcia on Blues for Allah. Surely, better advice has never been given. The band's only release during a self-imposed hiatus that lasted nearly 20 months, and the effort that witnessed the welcome return of percussionist Mickey Hart, the 1975 album marks the rebirth of a signature naturalism, spiritualism, and energy that had begun to fray because of ceaseless touring and financial pressures. And as experienced on this audiophile-caliber reissue, such inspired élan and elevated performance facets – embraced literally and figuratively on Bob Weir's hallmark "The Music Never Stopped" anthem – achieve transcendent heights.

The peerless transparency is reinforced by the chirping crickets on the title track, reggae-flecked crispness of "Crazy Fingers," and spinning-plate-on-a-stick rhythmic voodoo cast throughout by drummer Bill Kreutzmann. Recorded at Weir's intimate Ace Studios, Blues for Allah depicts the Grateful Dead returning to its collaborative roots: Entering the sessions with no preconceived ideas and letting inspiration move them brightly, resulting in improvised-meets-rehearsed compositions replete with varying time signatures, Middle Eastern motifs, and elegant scales. More than any other Grateful Dead studio record, Blues for Allah combines the ensemble's trademark exuberance with exacting precision and instrumental luster.

Aside from Phillip Garris' iconic, award-winning cover art dubbed "The Fidder," nothing illustrates the album's cosmic magic to the hair-raising extent of the album-closing "Blues for Allah" suite. A requiem, dirge, call to harmony, and plea for peace, the atonal closing track remains a subtle albeit universal statement about the importance of unity and the destruction that comes with war, division, and conflict. Delivered via Robert Hunter's poetic lyrics and the band's mesmerizing playing, the messages and prayerfulness resonate with as much – if not more – depth today than they did decades ago. Try not to lose yourself in the repeated refrains, Garcia's guitar arpeggios, or the invitation to twirl led by Keith Godchaux's graceful piano.

Of course, much of Blues for Allah is itself a dance goosed by a flurry of beautiful fusion devices and quicksilver melodies. Witness the taut "Crazy Fingers" – a series of haiku – or the knotty medley "Help on the Way/Slipknot!/Franklin's Tower," an exercise in controlled flow, urgent purpose, and, finally, liberating relief that remained a live staple from the moment it was introduced onstage. Not to be outdone, the wordless and acoustic-based "Sage & Spirit" feels the way its name sounds while the acid-jazz twists of "King Solomon's Marbles" swing via Phil Lesh's power-line-thick bass notes.

A soul-nourishing salve, Blues for Allah enchants with equal parts mysticism and reality, imagination and common sense. Rolling Stone scribe David Fricke insightfully deemed it a way to "shake away the darkness" and head "back to the light." Let it shine on brighter than ever via Mobile Fidelity's deluxe analog reissue.