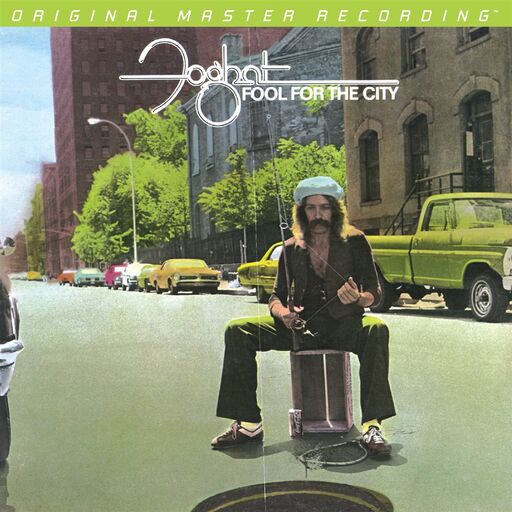 Mastered from the Original Tapes for Explosive Sound

Some songs are so ingrained in our consciousness that they are immediately identifiable upon hearing one or two notes. Featuring one of the most indelible riffs ever played, Foghat's air-guitar anthem "Slow Ride" is such a tune. The hit single turned the British band into stars and catapulted 1975's Fool for the City up the charts. And what a ride it is.

We hear a lot of yearning today about the good-old, glory days of rock and roll, the simple kind that just locked into a good beat, turned out a raunchy groove, and simply kicked you in the butt. The no-pretense type meant for kicking back, letting loose, and surrendering to the melody. Bare-bones music that doesn't need image or looks as a crutch.

Well, this is it, friends, classic meat-and-potatoes 70s rock that comes with killer slide-guitar solos, crunchy leads, driving rhythms, and soaring vocals. No need for any further instructions or explanations. The pact between artist and audience is understood. Here, the band trusts that you know what to do and is ready to rock out with anyone in earshot.

Sourced from the original master tapes by trusty engineers that were just stunned at the amount of new detail they were able to pull from the tape reels, Mobile Fidelity's remaster of this Foghat gem bring to the surface the band's marble-solid sturdiness and bluesy structures like never before. Bass notes are thicker and richer, the dual guitars bite and snap, and Lonesome Dave Peverett's singing comes across with realistic grit. By comparison, all previous pressings of this album sound flat, uninspired, and boxy--the absolute opposite of the energy Foghat brings to the boogie-infused title track, great cover of the Righteous Brothers' "My Babe," and, of course, the everlasting "Slow Ride," a staple of the Guitar Hero video game franchise and gentlemen's clubs everywhere.

"Fool for the City, Foghat's fifth album, reveals a band keenly aware of its strengths. They have the knack for turning a simple riff into a dense, driving number free of the excesses of other rock groups. Foghat's music is so sturdy, succinct and infections that one wonders why they haven't attained more prominence. This band may well be only a single away – and 'Fool for the City' may well be that single!"
– Bud Scoppa, Rolling Stone, December 1975