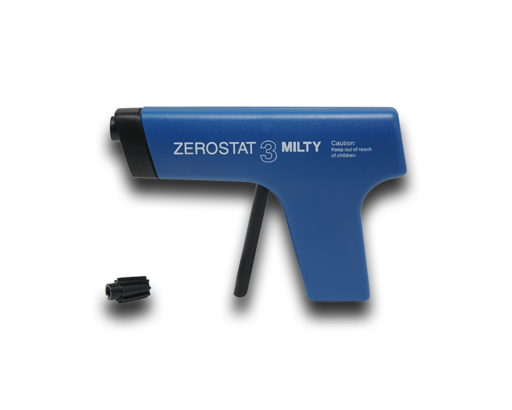 Zerostat 3 produces negative and positive ions that couple with the positive and negative static charges on an object’s surface, effectively neutralizing them.

The Zerostat 3 antistatic gun will produce dramatic static reduction for periods of time measured in hours, not minutes or seconds. And unlike certain antistatic sprays, the Zerostat gun will not leave any polymer resides behind on the record surfaces. We have found the Zerostat 3 to be equally effective in the removal of dust from plastic dust covers.

Use of the Zerostat 3 gun prior to the playing of a record will often times eliminate, or at least greatly reduce the "snap, crackle, and pop" from electronic discharge of the surface charge buildup that can occur.


Hold the Zerostat 3 pistol about 12 inches away from your record. Squeeze the trigger slowly; a powerful stream of positive ions projects over a spread of about 16 inches. Release it slowly, and negative ions are produced.


Regular use of Zerostat 3 can release dirt and dust on records, eliminating pops and crackles caused by static 'hot spots.' It's also ideal for reducing static charges on CDs and DVDs.


No Batteries Needed
Zerostat 3 is constructed of durable hard plastic material. It's built to last and is good for at least 50,000 trigger operations. Best of all, it requires no power supply, batteries, or refills of any kind. Zerostat 3 also includes a special ion-indicator which shows you that it is working. Just plug the indicator into the end of the 'pistol,' squeeze the handle, and a small neon tube will gently glow red.