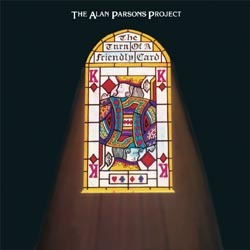 Although numerous doubts abounded that concept albums with thematic focus were not what people wanted to hear, Alan Parsons’ somewhat egomaniacal projects always found a broad public. Of course one can listen to the perfectly styled sound of the music which this man created at the mixing console and concentrate on its programmatic contents or wallow in its esoteric tonal depths. But you don’t have to, for Parsons’ velvety mixture of ballads and rock numbers will get your ear’s nerve ends tingling without lyrics and themes. The album "The Turn Of A Friendly Card" includes two of Parsons’ very best songs: "Time", with its beautiful harmonies, and the gently swinging "Games People Play" which opens with Empire fanfares. That the instrumental tracks find favour with almost all rock fans is hardly surprising because the music more often than not emulates the driving sound of Brit Rock rather than bombastic “sonic soufflés” (Rolling Stone). But be that as it may, the title certainly holds its promise. The sales figures for this album clearly show that this ‘friendly card’ has definitely turned up trumps for Alan Parsons. This Speakers Corner LP was remastered using pure analogue components only, from the master tapes through to the cutting head. All royalties and mechanical rights have been paid.

Elf: Trying To Burn The Sun

Trying to Burn the Sun by Elf is a great listen for all fans of 70s rock, not only Dio and Rainbow fans.