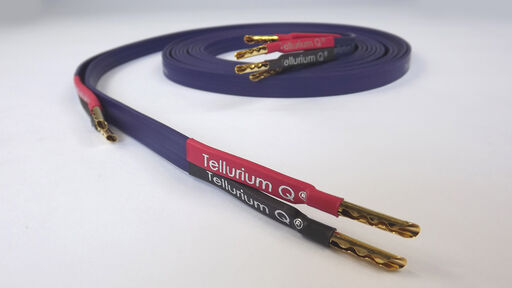 “Blue cables exhibited a tremendous sense of control; something that I’ve never heard from any cable at this price point.”

“...a degree of coherence, timing and focus distinctly uncommon, in my experience, for this sort of money.”

Tellurium Q ® is primarily an audio research and development (R&D) company that also manufactures products. R & D is at the centre of every decision we take and every product we make.

That is why we design and develop products starting with a completely blank canvas and ask “what is really happening with this process, in these materials” and build on solid fundamentals. That is why you may find that what we produce might look a little different from what you might expect but that is just because we are focused on how to get a better clearer sound. How something looks is of secondary importance because we are working for the serious audiophile and music lover who, like us,wants to hear more in their music. That may be the reason that although our little company has only just appeared on the HiFi scene has immediately been awarded 5 Globes for an entire speaker cable range, awarded cables of the year for the ENTIRE cable range by HiFi Plus magazine and again product of the year by HIFi World in their Jan 2011 edition. All in the first 12 months!

In January 2010 we had just the Tellurium Q Black and were sending out the first prototype runs of Tellurium Blue. Today there are a number of innovative products and more being planned with the coming of our electronics range.

We will not make a product that is just good or average, it has to be exceptional or we will not release it, that delayed the launch of our interconnects. While we had a product that was good and would stand up as well as any other cable it wasn’t truly outstanding. So even though we were told that our sales of speaker cable were being damaged by not having an interconnect to go with the cable we dug our heels in. There is just too much cable in the market now,so unless you can contribute something better and different why waste people’s time? We didn’t as you can find out yourself by listening to what we have released.

This is our promise and we are completely serious about it. When you buy a Tellurium Q® audio product you will be getting what we believe to be the very best available in its price range. Already in 2013 we have released a patented new type of semi active digital cable - the “waveform” series of digital RCA. The first units of our HiFi electronics are already being talked about on forum sites and the first reviews of our show piece SECA power amp really does prove that there is more to Tellurium Q® than award winning audio cable.

Colin Wonfor who was best known in the audio world for his acclaimed Claymore amplifier, is our technical director who is a specialist in analogue power having a patent for the quietest solid state relay ever, to his name.

Colin also developed the powerful Magnums which a speaker company still uses to this day to test speakers to their limit. Along with other amplifiers such as Proac Magnum, Magnum, Dreadnought, Claymore, Lescon, Oxford Acoustics, etc. He had the distinction of producing the most powerful single ended “A” class in the world - TOCA SECA amp range.

Although he was known for his audio products he is actually an analogue power specialist and that has even taken him to NASA where he designed the most efficient power supply in the world (at the time) for use in the space station. While he was there with them he advised NASA engineers about other classified power projects.

Currently the whole team at Tellurium Q® is committed to an ambitious development schedule of products in 2013. (For a relatively small company that is).

We have been here for 3 years now, a blink of the eye for some companies but we are fully focused on our customers, music lovers and audiophile enthusiasts who want the cleanest most natural sound. This means that are technical focus remains as it has since we started and the same reason that Tellurium Q® came into existence:

To develop products that successfully combat the underestimated problem of phase distortion in hifi.