Ry Cooder Is a Master Sonic Archeologist and Cultural Historian on Boomer's Story: Guitarist Pays Tribute to the Past and Updates Music for Future on Rustic Record Steeped in Folk, Blues, and Soul MFSL1-405 , Hifimestan varastossa 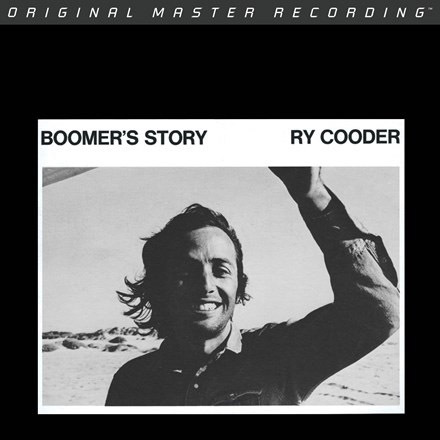 Ry Cooder Is a Master Sonic Archeologist and Cultural Historian on Boomer's Story: Guitarist Pays Tribute to the Past and Updates Music for Future on Rustic Record Steeped in Folk, Blues, and Soul MFSL1-405

Mastered from the Original Master Tapes, Pressed at RTI, and Strictly Limited to 3000 Numbered Copies

Ry Cooder's development as a peerless musician capable of grasping virtually any style began with his time spent with Taj Mahal and Captain Beefheart, but for all intents and purposes reaches epic proportions on Boomer's Story. With two ambitious albeit uneven studio albums behind him, the California native plunged into roles that still define him today – that of sonic archeologist and cultural historian, shaping his 1972 Reprise effort with enlightened selections carved into the bedrock of America's folk, blues, and soul landscapes. Inspired, virtuosic, and poignant, Boomer's Story endures as a ravishing portrait of inspired translation and inventive craftsmanship that after years of neglect finally boasts sonics deserving of the performances.

Mastered from the original master tapes, pressed at RTI, and strictly limited to 3000 numbered copies, our180g LP of Cooder's breakout teems with natural tones, front-to-back imaging, and vintage tube warmth. Boomer's Storybenefits from vibrant textures and organic openness, two prized traits that come to fore with breathtaking realism on this analog reissue. Details ranging from the audible resonance of the drum skins, drifting reverb on the guitar, and inner cavity of the piano take up residence on deep-black soundstages. Individual notes appear and recede with lifelike decay. Cooder and company sound as if they're in the room, playing in real time with one another. This record has never been more dynamic or involving.

Having initiated his self-taught learning of customs established by the likes of Josh White, Woody Guthrie, Charlie Johnson, and Robert Johnson as early as age four, and grown up a son of parents obsessed with Folkways Records, Cooder never suffers from the retro rehash fakery plaguing countless contemporary revivalists. A true original, the guitarist simultaneously pays tribute to the past and updates it for the future. Boomer's Story, brims with traditional tunes (the title track, "Good Morning Mr. Railroad Man"), classic blues ("Ax Sweet Mama," "Cherry Ball Blues"), and World War II standards ("Comin' in on a Wing and a Prayer").

A spellbinding blend of personality, respect, and innovation grace every song. Evoking the timeless rusticism and "weird, old America" vibe of Bob Dylan and the Band's Basement Tapes, Boomer's Story unfolds with a relaxed ease and back-porch chemistry underlined by the musicians' unpretentious demeanors and potent abilities. Drummer Jim Keltner, percussionist Milt Holland, and bassist Jim Dickinson (also a producer) are among the cast fleshing out Cooder's visions. The headliner also welcomes country-blues legend Sleepy John Estes to sing on his own "President Kennedy" and leans on pianist Randy Newman to help him transform the normally bellicose "Rally ‘Round the Flag" into a patient, mournful protest.

Cooder attains equally meaningful, emotional results on a definitive wordless interpretation of the staple soul ballad "The Dark End of the Street," expressing unfathomable depths of regret and longing via slide-guitar work that draws a line back to Blind Willie McTell's immortal spiritual "Dark Was the Night" – a song Cooder called "the most transcendent piece in all American music." Indeed, the degree of interplay attained by twinkling keys, rambling beats, brass accents, and dazzling guitar lines – also finger-picked and strummed – on Boomer's Story breathes with a rare air increasingly endangered in an era of on-demand immediacy and auto-tuned imitation. This, as it's said, is the real deal.

6. The Dark End of the Street

7. Rally ‘Round the Flag