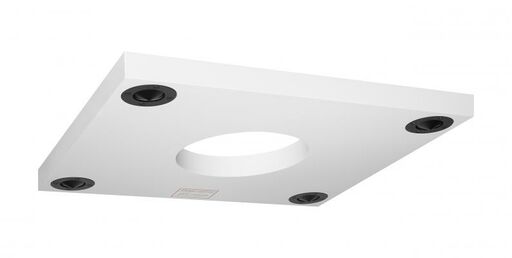 Everything vibrates, period. For the audiophile, this is a serious challenge, since vibration affects the delicate audio signals in virtually every hi-fi component. Vibrations move through the floor, the furniture and the air to enter audio equipment via the feet and chassis. And of course the equipment itself generates further vibrations.

These ‘unwanted’ resonances raise the noise floor in turntables. They interfere with the vibration-sensitive crystal oscillators in computers, DACs and streamers. In disc players, they cause the error-correcting circuitry to work overtime while in both valve and transistor amplifiers, they jangle the microphonic components. All of which serves to degrade the quality of the audio signal at various stages in its journey from source to ear, ultimately constraining the optimum performance of the overall system.

Blue Horizon’s new Sanctum isolation platform is specifically designed to isolate individual high-performance components such as turntables, DACs, preamplifiers, power amplifiers, CD players and streamers from all sources of unwanted vibration. The platform’s construction brings together a selection of carefully chosen materials from opposite ends of the elasticity spectrum, combining them in such a way as to dramatically reduce resonance evenly across the audio band.

The platform shelf is made from high density fibreboard (HDF), favoured for its mechanical stability. Unlike woods with a fixed grain, HDF does not expand or contract with climatic changes. The HDF shelf is precision-machined in five places: four recesses, one at each corner, and a circular central hollow designed to eliminate any standing waves within the shelf itself.

Each of the four corner recesses features a complex isolation foot made up of three key elements:

Each isolation foot’s complete assembly is held in place by an outer ring which prevents the individual parts from dropping out when the platform is being lifted into position, but which decouples once the Sanctum is in place, leaving the platform freely floating on the isolation feet.

"Sanctum provides a solid base that noticeably improves the sound both sonically and dynamically.”
lite-magazine.de

"I was impressed at the sonic improvements which were obvious and, especially via the lower costs components, quite startling. Isolation…you need it in your hi-fi life."
Paul Rigby, The Audiophile Man

"When in use supporting my record deck, I hear definite improvements, including a tightening up of the bass, which has more attack and punch than without the Sanctum in situ.  The music appears to flow more effortlessly and I find that silences during momentary pauses sound somehow more natural and realistic."
Hi-Fi Choice Magazine